Found a better price? Click here and watch us try to beat it. 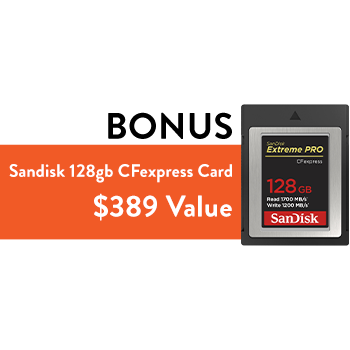 Designed to cater for diverse photographic needs of professional photographers and videographers alike, in genres including sports and wildlife photography, the new flagship Fujifilm X-H2S camera carries an impressive array of features including the highest burst-mode/ AF and video performance in the history of the X Series portfolio.

The X-H2S features an evolved AF system that enables continuous high-speed shooting up to 40 frames per second, a newly-developed subject-recognition AF technology, and the capability to record 6.2K/30P and 4K/120P video. Other features include the five-axis in-body image stabilisation that offers up to a 7.0-stop advantage, a highly-robust magnesium body, as well as extensive interface options including the new slot for a CFexpress Type B card and an optional file transmitter (sold separately).

Key Features of the Fujifilm X-H2S

This 26.16-megapixel image sensor not only inherits the previous model's back-illumination style but also adopts the stacked-layer structure to become the first stacked APS-C sensor capable of quadrupling the read signal speed in comparison to the X-H1. The dramatically improved performance includes up-to-40fps blackout-free burst mode and a significantly better AF rate during continuous shooting. As for video performance, the sensor can record 4K/60P video without cropping and with substantially reduced rolling-shutter effect.

The all-new processor provides improved image quality at low ISO and reduced noise at high sensitivity in still, while delivering significantly improved AF accuracy and speed. The processor also enables subject-detection and AF tracking of a targeted subject with increased accuracy. In video, the processor enables filming 4:2:2 10bit video at 6.2K/30P and 4K/120P while supporting a variety of codecs including Apple ProRes 422 HQ.

Deep Learning Subject-detection AF
The new image processor features a subject-detection AF function that has been developed with Deep Learning technology. It detects and automatically tracks not only the human face/eyes but also animals, birds, cars, motorcycles, bicycles, aeroplanes and trans to maintain autofocus - allowing you to concentrate on photographic opportunities and framing while the camera keeps a targeted subject in focus constantly.

The EVF uses a high-resolution 5.76-million-dot OLED panel with 0.8 magnification. The smooth approx. 120fps frame rate viewfinder offers improved visibility thanks to strong suppression of distortion that can occur when an eye position becomes displaced while using the viewfinder, thereby enabling accurate tracking of subject movements.

The XH2S features an all-new five-axis in-body image stabilisation mechanism, which offers up to 7.0-stop advantage thanks to the new processor and a new sensing control function. You can now comfortably choose to hand hold the camera to shoot active situations such as sports or in low light conditions.

The Fujifilm X-H2S incorporates a new heat-dissipating structure to substantially increase the maximum video recording time, enabling up to 240 minutes of 4K/60P video*. You can also attach the optional cooling fan (FAN-001) to enable extended video recording even in high-temperature conditions

*When recording video at 25°c in a cold start, with the auto power-off temperature set at "High", bit rate of 100Mbps, a vertical battery grip VG-XH mounted and using three batteries. Please note: The recording duration depends on the remaining battery charge and the type and capacity of the memory card used. When the main unit heats up, filming may automatically be terminated.

The X-H2S inherits the popular design features of the X-H1, such as the large grip that works well with larger lenses, the LCD panel on the top panel to easily check settings at any time, and a highly robust camera body that can withstand heavy professional use. User feedback has also been reflected to bring improvements in operability to the X2HS.

All our FujiFilm cameras come with FujiFilm Australia Warranty.
Buy with confidence from a reputable seller. digiDirect does not sell grey-import or grey-market stock.
For more on our warranty policy please see digiDirect FAQ Warranty